For the past several weeks, we’ve been using Prima Latina from Memoria Press as part of a review for the Old Schoolhouse Review Crew. For grades 2-4, Prima Latina is a beginner course that leads up to Latina Christiana from Memoria Press. I’ve chosen to have all of my school aged children sit in during the DVD instruction (ages 4-9) and then had Liberty, grade 5 this fall, and Eden, grade 4 this fall, work on the workbook and flash cards.

I’ll readily admit, when I got the notification that I’d been chosen for this review, I groaned. Latin scares me. Foreign language in general scares me. But my months on the Review Crew have been learning ones, stretching ones, and not in a bad way. When I received the books and DVDs and CDs and flashcards for Prima Latina, I wasn’t exactly looking forward to this review. Turns out, I don’t have to teach Latin. Leigh Lowe can do it. Whew.

The evening after we did the very first lesson, my six year old son was saying hello to me in Latin. He then turned to his sisters and said hello to them in the plural form. Okay, maybe we can learn a bit of Latin! Prayers, Hymns from Lingua Angelica, constellations, and sayings are all taught on Prima Latina. The Lord’s Prayer is included, and contained the Catholic version of the prayer. We aren’t Catholic so this was a little bit disappointing, but that was the only thing negative I found in the curriculum during this review period.

The DVDs are interesting and fun. Yes, Latin and fun can be in the same sentence. Imagine that. There are 3 DVDs in the case, each with lessons that last 3 hours for a total of 25 lessons lasting 15-20 minutes each. The pronunciation leaves no room for misunderstanding. It’s repeated and repeated for the student to say it with the DVD, you say it on your own, and repeated some more. We all walked away able to repeat again what we’d learned and the chatter for the rest of the evening was often on the DVD’s lesson. I love that they are interested enough to continue talking about it later! There are tests every five lessons to review what the student has learned and check for retention and mastery. The flashcards are a huge help – every word the kids learned are in there.

The kids all actually asked to do this curriculum. We used it just a few days a week, but they could have easily done it more often – but I figured since the kids were doing it, I was going to watch and learn too, so we went slow enough for my old(er) brain to keep up. The kids would have easily been able to do it on their own with very little instruction, but then I’d have no idea what they were saying to me!

We’ll definitely be finishing this curriculum in the coming school year. Prima Latina and teacher Leigh Lowe have changed my mind on how hard Latin (doesn’t) have to be. I think the knowledge they gain from Prima Latina will help greatly as they explore English and the origin of the words. Noticing how many English words began as Latin root words has been fun for all of us. 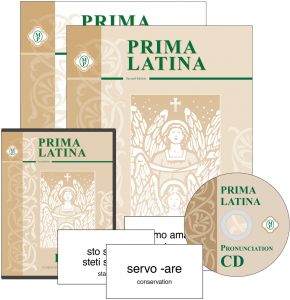 The Prima Latina complete set is available on the Memoria Press website for $90.90. From their website, it contains:

For more reviews from others on the review crew of this curriculum and of Geography I, both from Memoria Press, visit the Review Crew blog.