For the past month or so, I’ve had Liberty, Eden, and Sterling using MathRider as part of a review for The Old Schoolhouse Magazine. MathRider is an “intelligent” math game download that teaches and reinforces multiplication, division, addition, and subtraction with numbers 0-12. I’m able to enter each of my school-aged children’s names and capabilities and MathRider takes it from there. Once they are doing well with one area, I can set it up for them to move on to a harder set. It keeps changing it’s expectations based on the kids’ performance, and expects them to do as well or better as they have in the past. 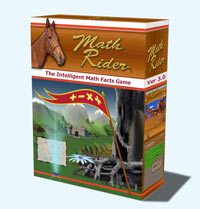 Liberty has LOVED MathRider. She finished her 4th grade math book for the school year right about the time we began using MathRider, and she asked if she could do MathRider each day in place of her finished textbooks. She’s advanced through many levels now and continues to ask to use it. It got to the point I had to tell her enough was enough – she’d gladly play for hours! Her times have improved and she’s gotten better at the math facts she’d already learned. The program tells her when she’s answered a question faster or slower than she has in the past and stops to correct any incorrect answer immediately. It awards “points” toward their level goal where appropriate.

Eden just finished 3rd grade math and doesn’t enjoy it so much, but still wanted to play MathRider after watching Liberty play. Something about making math a game made life so much better. She has timed tests in her regular math curriculum each day and, in playing MathRider, her times on those timed tests improved! She was thrilled, and I’m thrilled for her. She asks to play each day as well. All the kids crowd around the computer, enamored with the story line – and quite frankly, if they want to watch math facts float across the screen and yell answers at the player, I’m good with that! (Ruby, age 4 and not yet learning math, has been hilarious. She hollers out any and every number she can come up with. I figure it’s good for learning dedicated attention – right?!)

Sterling has just finished kindergarten, but he did first grade math this year. He knows his math facts but has a hard time coming up with the answers quickly. He’s gotten frustrated with MathRider because he isn’t fast enough in remembering the answer and typing it in, but we’ll keep on this one. I’m certain he’ll get better and faster at it with a bit of perseverance.

I can pull up the statistics and see where each of my kids have improved – and things like Liberty and her obvious liking for doing division problems over anything else, while Eden chooses subtraction most often. It shows their “mastery level” and where they were when they started.

“MathRider uses the Adobe® AIR™ runtime. This means our Math game runs on Windows and Mac. Your computer requires about 80MB of available hard disk space. Your monitor (and graphics card) need to support at least a resolution of 1024 by 768 pixels.”

There is a 7 day free trial available for MathRider. To purchase, MathRider is $47 and includes free updates for life. This allows for 8 players who each create their own “rider” and settings. The game constantly adjusts itself based on your child’s progress.